One of the things I worked to minimize and simplify during the initial days of the pandemic was my setup. Since I was already working partially remote, and with a focus on mobility, I decided that since most likely I was going to remain remote, I needed to be nimble in my setup and be able to work from anywhere.

My original setup was a heavy MacBook Pro 15” with a mouse and tons of apps and tools. I was also carrying a backup drive, chargers and a few other things that ultimately were just mostly wasting space on my backpack. So, after reviewing them all, and making some changes, here’s what I have been using for the past year and a half. 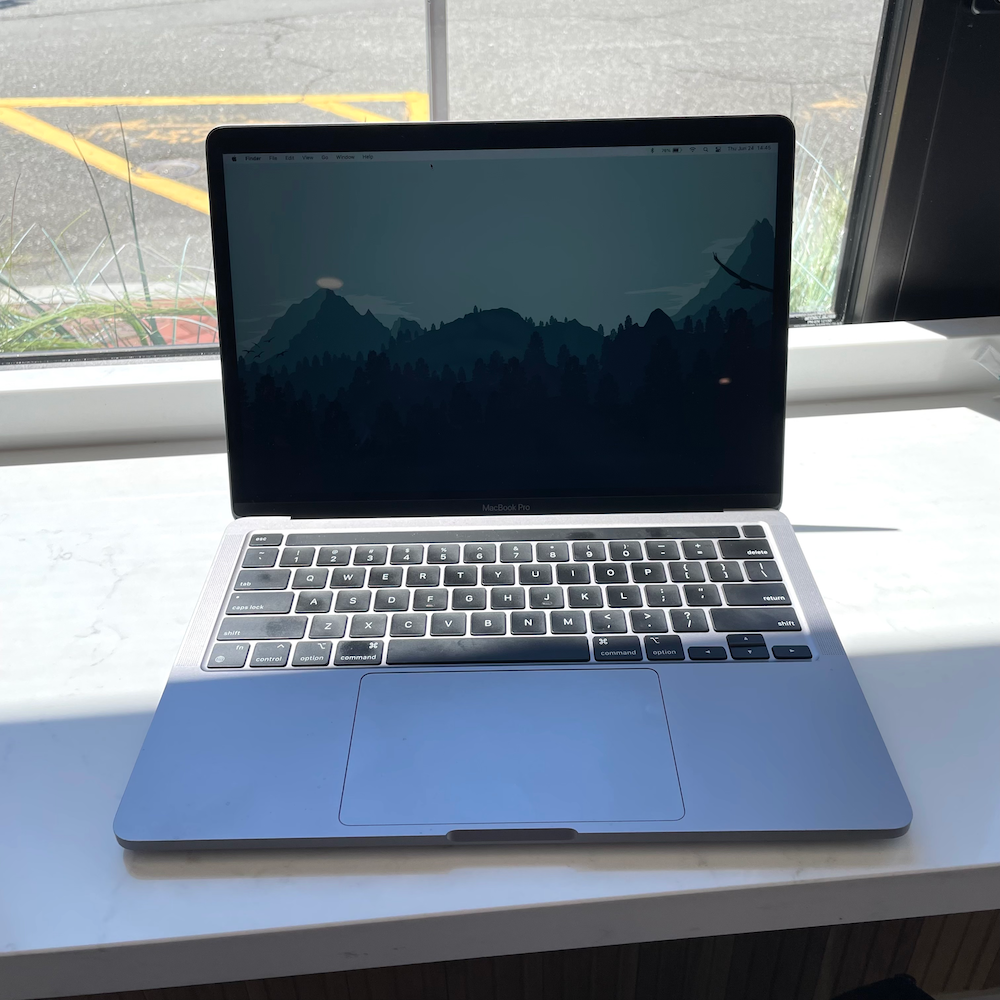 I sold my 15” Pro and got instead a 13” Pro. I have a big monitor at home, and if I need a bigger screen, I can always plug it in. But the 13” MacBook allows me to be lighter, and the size can fit a wider range of backpack and messenger bags. I got the newer 13” with the M1 chip, and it has been great. A few hiccups with some incompatible Intel binaries, but for the most part all works.

I stopped carrying a mouse and got used to using the trackpad that comes with the Mac. One less piece to carry. I also stopped bringing the extra drive, and instead I sync all with a Dropbox account.

For my phone I chose the iPhone 12 last year. It’s an OK phone, has some issues with battery life, but I can run most of the same apps I use on my Mac, making syncing very easy. I managed to work from the phone a few times, and while it wasn’t perfect, it was good enough to get what I needed done. Between the 13” MacBook Pro, and the iPhone 12 I can cover all my needs. It’s a good combo.

Finally, I took stock of all the extras, and aside from the charger for the laptop and iPhone, I discarded all the stuff I was carrying. My hardware setup is now super simple and easy to carry.

For the past couple of years I have been using Mac OS stock tools whenever possible. It started as an experiment to see if I could use a Mac right out of the shelf without any additions, and, well, after a little over two years, it has become a way of working. I always try to find the simplest tools possible to work with, the ones that can give me the best experience, and while a few years back Apple stock apps were bad, lately they had become better and more appealing.

Going this route has allowed me, like I mentioned, to sync info between the iPhone and Mac in a very simple way. It has also enabled me to research and create better methods of working and productivity due to the simplicity of the tools that are now in use.

I do install some extras of course, but for the most part it’s all standard stock apps that come with the Mac and iOS. The extras are listed below.

I install and uninstall some other applications as needed, but those usually are single used and go away fast. The applications listed above are the ones that live alongside the stock apps that I use the most. The stock apps are:

The two most important pieces of software I use across the two devices are Notes and Reminders. 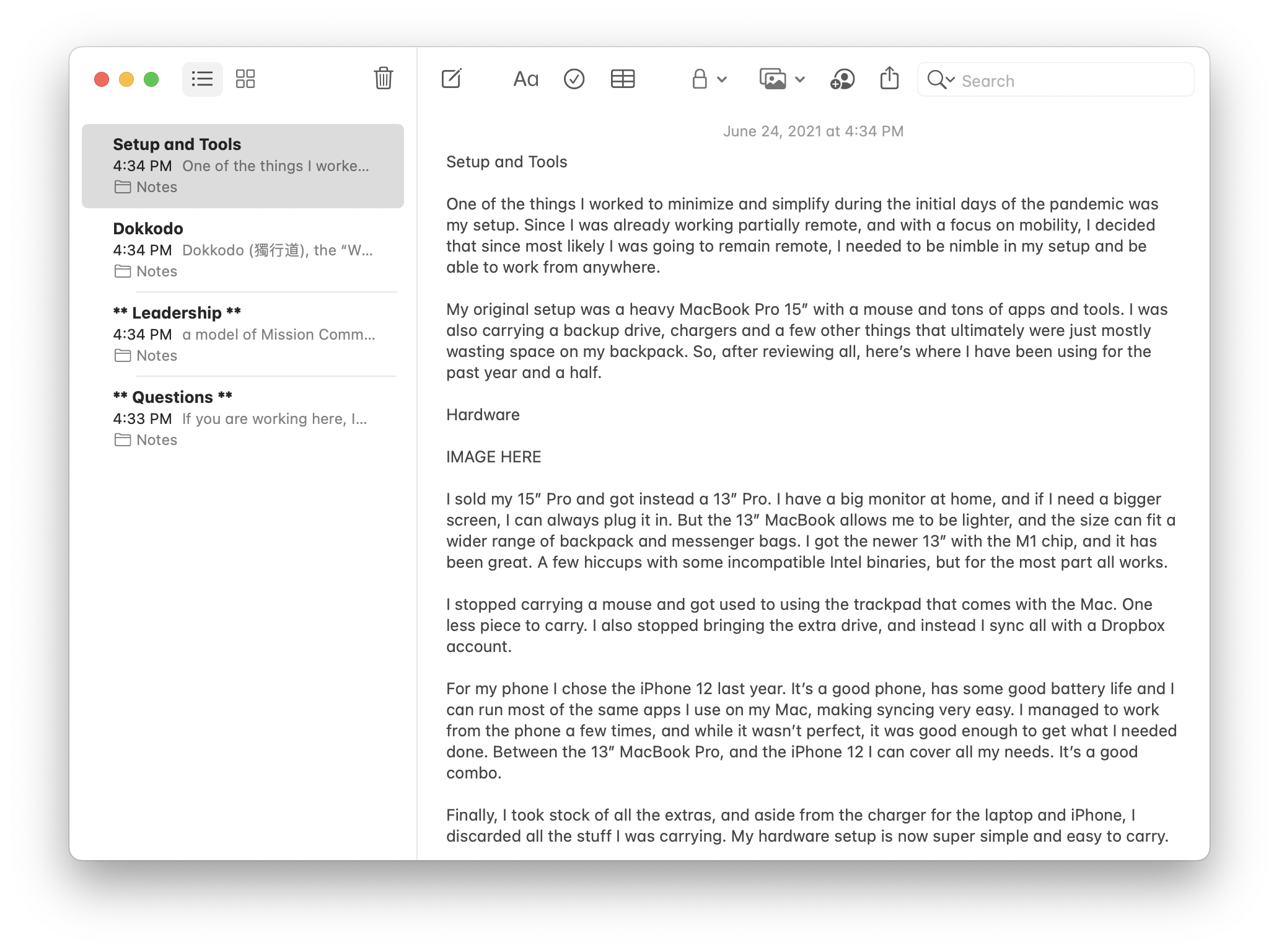 Notes is a simple yet powerful note-taking app. I have it open all the time, and I use it both for full on notes and quick thought dumps. It’s a simple tool that does one thing well.

The interface came a long way and it’s now clean, easy on the eyes, and simple. It’s easy to just use it and write notes. And it syncs with Notes on the iPhone, so I can always have the notes out there with me. 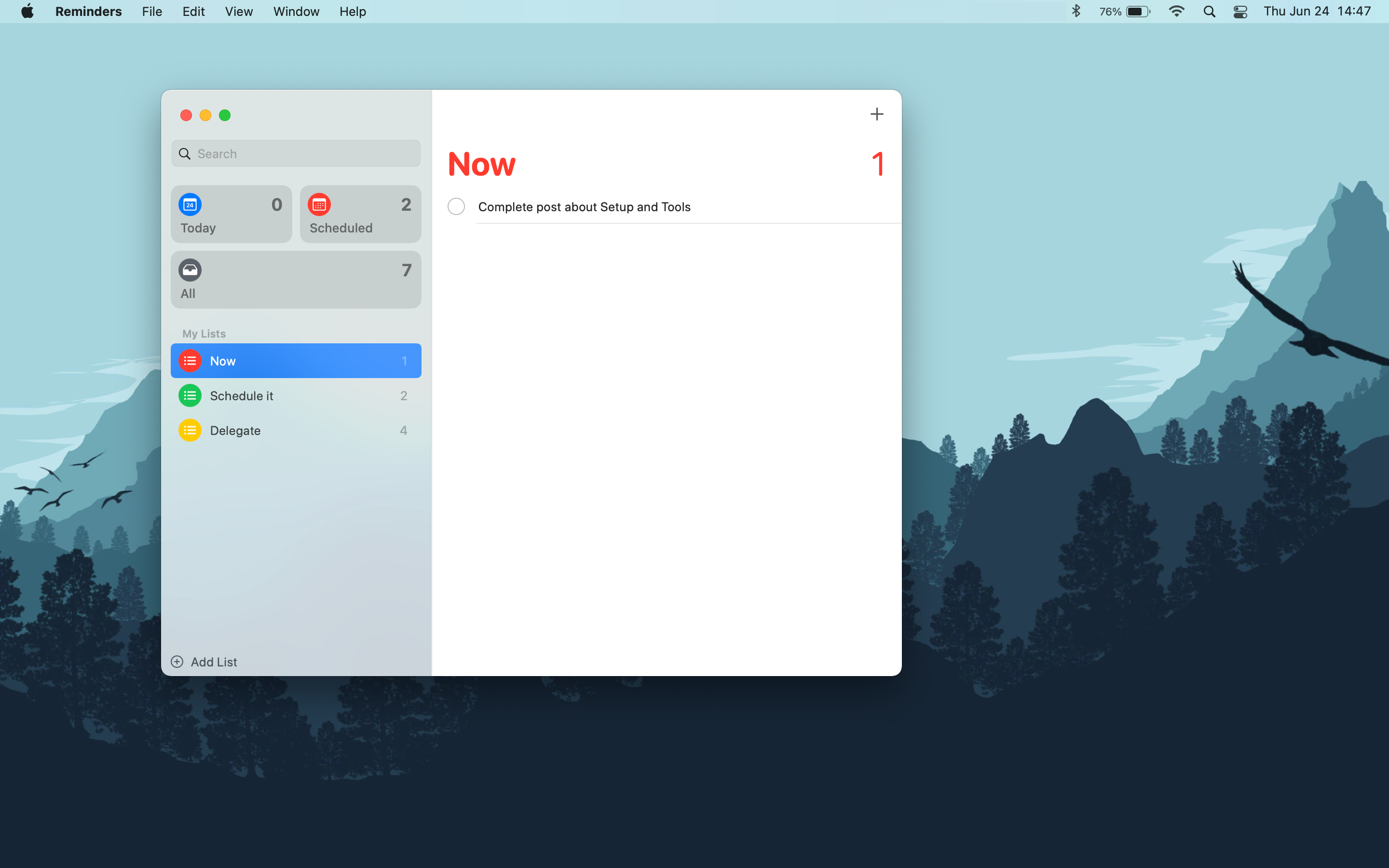 Reminders is amazing in its simple complexity. I use Reminders to prioritize the things I need to do every day for work. I follow the Eisenhower Matrix Method, where I work according to importance and urgency. I set up the app with 3 lists: Now, where I place the tasks that are urgent and important, and that I need to work and finish today, Schedule it, where I add the items that are important but not urgent, and I can schedule when to do them, and Delegate, where tasks that are urgent but I can’t find a way to do them and get delegated to someone else. Anything else lives in the inbox, and gets prioritized at the end of the day, or deleted if they are not important or urgent.

I usually pick the tasks to work on that day, or ones remaining from the previous day that need to be finished, and work on those. I live in the Now list.

I live mostly in these two apps (Notes and Reminders), since I can achieve most of what I need there. Having these two tools be simple and synced across all my devices has allowed me to really simplify productivity and information sharing. It’s great. And as you can see above, I tend to keep my desktop very simple and uncluttered, which ultimately enables more focus and less visual distraction. Simplicity rules.

Yeah, I was working in a cafe when I took the picture above. That’s the beauty of remaining light: you can go anywhere to work. It is important to me to retain this ability since I will most likely remain remote for the foreseeable future, and I like having the opportunity to work from home, or a cafe, or go to the beach and sit there.

So, simple tools, simple setup, and an uncluttered way of working. Let’s go do it.